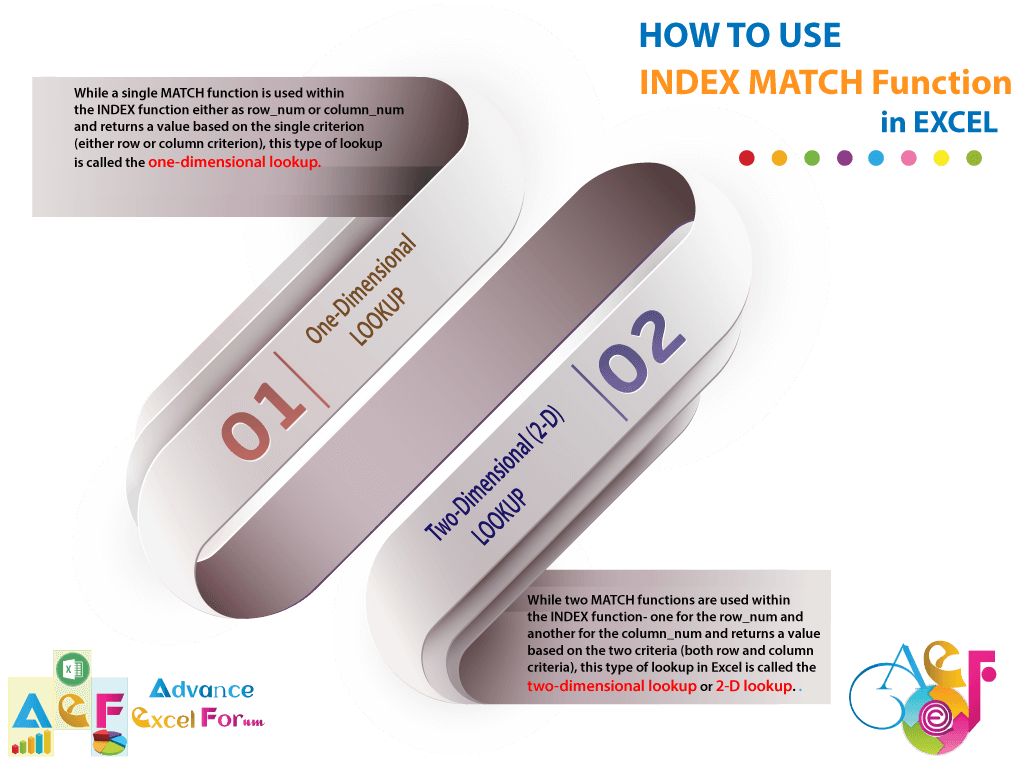 I. The INDEX Function

In a cell, press equality “=” sign to start formula and just type a few letters ‘=ind….‘ and select the INDEX function from the given suggestion list with the help of a down arrow (↓), if required.

Then press the ‘Tab’ key, INDEX syntax appears with the open parenthesis.

• The syntax for the INDEX Function

The INDEX function always returns a value or item specified by the intersection of the row_number and column_number. If the array contains only one row or column, the corresponding row_num or column_num argument is optional.

• Arguments of the INDEX Function

∴ Array or Reference is the one or several ranges, named range, or table;

∴ Row_num is the row number in the array (if omitted, column_num is required);

∴ Column_num is the column number in the array (if omitted, row_num is required);

∴ Area_num specifies which range from the reference argument to use.

(01) If the array is one-dimensional, meaning it contains a single row or column, then both row_num and column_num are not required.

For example, if we want to return the fourth item within a simple one-dimensional array using the following formula:

Which would return a value 20, the fourth item in this array.

(02) The INDEX function is more frequently used with two-dimensional arrays or tables, where both  row_num and column_num are required.

The INDEX function retrieves the item fourth rows down and two columns over a range. That means the formula would retrieve the item from the cell B4.

(03) If the array is two dimensional, which means it contains multiple columns and rows, and one of the arguments is omitted or set to zero, the INDEX function will return the whole row or column.

As a result, the entire B column is totaled.

Similarly, press equality “=” sign in a cell to start the formula and just type a few letters “mat…” and select the MATCH function from the given suggestion list with the help of a down arrow (↓), if required.

Remember that upper and lower case doesn’t matter for typing the function, Excel by default converts it into the upper case.

Then press the ‘Tab’ key, by default MATCH syntax appears with an open parenthesis.

• The Syntax for the MATCH Function

∴ Lookup_value is the item to match. It can be a number, text string, a logical value, or a reference.

∴ Lookup_array is the table or an array containing all of the values to search.

∴ Match_type is a number that specifies how the match will be applied.

• If match_type is zero (0), the MATCH function finds the first value/item in the array that is equal to lookup_value.

• If match_type is 1, the MATCH function finds the largest value less than or equal to lookup_value.

• If match_type is -1, the MATCH function finds the smallest value greater than or equal to lookup_value.

In the last two cases, the values in the lookup_array must be in ascending order for the MATCH function to work correctly.

III. How to INDEX MATCH Formula is performing in Excel?

The INDEX-MATCH formula returns the value in a particular row and / or column of a given range of cells.  If the specified range of cells represents a single row, we need only specify a column reference (all of the cells are in the same row).

Similarly, If the specified range of cells represents a single column, we need only specify a row reference (all of the cells are in the same column). This single-way advance lookup is called the one-dimensional lookup.

If the specified range of cells contains both multiple rows and columns, in this case, the INDEX MATCH formula returns the value in the cell at the intersection of the specified row and column. This both-way advance lookup is called the two-dimensional lookup or the 2-D lookup.

A. INDEX MATCH Formula is performing the One-Dimensional LOOKUP:

If we observed both examples carefully, we find that only INDEX_array (answer area) changes in both cases. This is the key point for the INDEX MATCH formula with a one-dimensional lookup.

If we use two MATCH functions within the INDEX function – one for the row_num and another for the column_num, then the formula returns the value based on the matches between the row criteria and the column criteria. This type of lookup is called the two-dimensional lookup or the 2-D lookup.

If we observed both examples carefully, we find the two key points for the INDEX MATCH two-dimensional lookup:

• The INDEX MATCH function is performing Excel Reverse VLOOKUP | VLOOKUP to the left.

• The INDEX MATCH function is the best alternative of VLOOKUP Multiple Criteria in Excel.

• The INDEX MATCH function is the best alternative of Multiple VLOOKUP or Multiple columns VLOOKUP.

V. INDEX MATCH VS VLOOKUP – Which Function is Better in Excel?

■ Performing Reverse or Backward Lookup: The VLOOKUP function only performs to the right, whereas the INDEX MATCH formula performs a both-way lookup or two-way lookup, i.e., left and right of the lookup column. Left lookup is considered as reverse lookup or backward lookup.

■ Performing Two-Dimensional Lookup / 2-D Lookup: The INDEX MATCH MATCH formula or the VLOOKUP MATCH formula searches the match between the rows and columns criteria and returns the value. This feature in EXCEL is called the two-dimensional lookup / 2-D lookup.

04 Best Ways : How to Use Multiple Columns VLOOKUP in Excel

According to Sudipta, "Advanced Excel is a very necessary modern tool in the advanced world that can only be achieved through a committed focus and self-analyzing skills".

Sudipta Mondal is a writer, author as well as founder of "Advance Excel Forum (AEF)". It is the best learning platform on Advance Excel. According to Sudipta, "Advanced Excel is a very necessary modern tool in the advanced world that can only be achieved through a committed focus and self-analyzing skills".

Tutorial 01: How to Use Excel SUMIFS Function with Single & Multiple Criteria

Posted on June 27, 2019October 31, 2019
VLOOKUP Multiple Criteria means VLOOKUP formula searches the lookup_value from the multiple columns or multiple cells or multiple ranges and retrieves a value based...
Read More

How to use CHOOSE Function in Excel with 06 Best Examples

Posted on June 22, 2019October 27, 2019
The CHOOSE function is very useful in advanced Excel which returns the specific value from a list of values supplied as arguments.  The CHOOSE...
Read More

How to use VLOOKUP Function in Excel | allows 03 Best Matches

Posted on June 27, 2019October 27, 2019
The VLOOKUP function is a lookup and reference function that accepts a value that looks the value up in a vertical lookup table with...
Read More

Posted on June 22, 2019October 27, 2019
DOUBLE VLOOKUP is a term in Advance Excel where two VLOOKUP functions nested with the IFERROR function to make a nested formula that sequentially...
Read More

04 Best Ways : How to Use Multiple Columns VLOOKUP in Excel

Posted on May 8, 2020May 8, 2020
Multiple Columns VLOOKUP in Excel is an advanced level of the VLOOKUP formula where the formula is used once with a certain condition(s) in...
Read More